At the solemn ceremony held in Kulturni center Janez Trdina in Novo mesto, where the speaker of honour was Zdravko Počivalšek, the Minister for Economic Development and Technology, the TPV Group celebrated its 30th anniversary of existence.

Over the last thirty years, TPV has grown from a company to a group which today is an important player in the global market of the automotive industry. They sell their products on 4 continents and in 26 countries of the world. With about 1.200 employees, they are located in five sites in Slovenia, they also have a production site in Serbia, and in the coming years they are going to expand their production facilities to the new markets. Year after year, they have been promoting innovations and therefore connecting themselves into development partnerships with other companies and institutions of knowledge. Today they develop products installed in the most high-end vehicles and premium car brands using the most advanced materials and breakthrough technologies of their own development, enclosed in the so called factory of the future. This makes them one of the most distinguished players in the trend of Industry 4.0. In partnership with Böckmann, they are one of the leading and most innovative manufacturers of light car trailers in Europe, and they also have one of the biggest car dealership and service centre in Slovenia.

At yesterday’s ceremony, the guests were first addressed by Mr Marko Gorjup, President – CEO of TPV GROUP, who pointed out that on the 30 year long successful journey TPV has grown from a supplier to a globally recognized development and even pre-development supplier, so their big responsibility now is to continue to develop, enhance and build an even stronger TPV Group. At the end of his speech he especially thanked Mr Vladimir Gregor Bahč, the long-standing Board President and today’s Chairman of the Supervisory Board of TPV GROUP for his determination, courage and a clear vision he demonstrated to take the TPV Group, over the 30 years of operations, to the very top of the automotive industry, in recognition for which he conferred the award of honour on him. 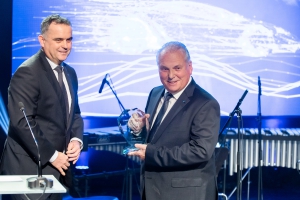 Then Mr Vladimir Gregor Bahč shared his memories with all gathered of the thorny path they walked through in the early years. He said how proud he is of his colleagues and partners who stayed by his side, because »in such bad conditions for doing business, sometimes on the very edge of survival, not even the boldest would have dared to dream that our 30 year old story could have such a happy outcome as that which we are witnessing today.”
The speaker of honour, the Minister for Economic Development and Technology, Mr Zdravko Počivalšek, commended the development and associating orientation of the TPV Group and announced that within the Investment Promotion Act the Ministry of the Economy has approved a support to the comprehensive investment of TPV in the territory of the municipality of Brežice. The total amount of the investment is 49 million €, of which the Ministry of Economic Development and Technology will grant 6,5 million € according to the Investment Promotion Act. The investment will create 50 new jobs, of which at least 20 highly qualified jobs, and therefore represents an excellent opportunity for the development of this border region.

In the name of the Municipality of Novo mesto, Gregor Macedoni, the Mayor of the City, also congratulated the TPV Group on its anniversary and pointed out that whenever he represents the city of Novo mesto at home and abroad, he »is repeatedly confirmed that TPV is, with its quality products, innovations and reliability, an internationally recognized partner of many reputable companies worldwide.” 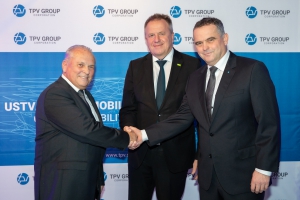 Tomaž Kordiš, the Director of the Chamber of Commerce and Industry of Dolenjska and Bela Krajina, on the occasion of the 30th anniversary of TPV Group, conferred a special recognition of the GZDBK for its contribution to the economic development of the region, for its export-based operations and for its global performance in the industry.

Among numerous activities the TPV Group has been performing during the jubilee year, they did not forget their social responsibility. In the spirit of their vision »Creating mobility of the future«, Mr Marko Gorjup and Mr Vladimir Gregor Bahč offered a modern sports wheelchair to a disabled basketball player Milan  Slapničar. Milan is a permanent member of the Slovenian wheelchair national basketball team, and he also plays in the regional NLB wheelchair league. According to the national team coach Žiga Kobaševič, Milan is currently the best player and the strongest link in the national team. Milan is an example to many, but above all he is a great encouragement to the disabled who, in the beginning, face unimaginable traumas.  The new sports wheelchair, which is specially adapted for basketball,  is lighter, quicker and more agile, so it will provide him an even better mobility in the future. 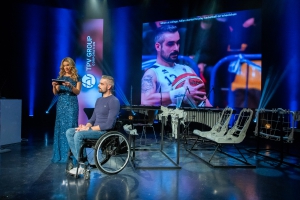 The ceremony was led by the always charming Bernarda Žarn and enriched by musicians from the Dolenjska region Irena Yebuah Tiran, the accordionists Katarina Štefanič Rožanec and Tomaž Rožanec, and finally by a young percussion band MuwaRuwa Gruva from the Music School of Marjan Kozina, Novo mesto who performed on the TPV Group products.

ABOUT TPV GROUP:
TPV Group is one of the leading development suppliers operating on the global market of automotive industry. Their core activity, whose main driver is the company TPV d.o.o., is development and production of different components for automotive industry, such as body and chassis assemblies, car seat components and parts, and engine gaskets. Moreover, they develop and provide comprehensive solutions for production logistics management, where the automated guided vehicles, which are result of their own development, are one of the key products. The company is located in five sites in Slovenia– Novo mesto, Brežice, Suhor, Velika Loka and Ptuj – and one site in Kragujevac, Serbia. Due to the needs of customers, they intend to extend their production processes to new markets in the following years.
They are globally recognized as a development and pre-development supplier in the automotive industry. Their development services are purchased by most demanding OEMs for their premium brands like BMW, Mercedes Benz, Volvo, Rolls Royce, Jaguar, Land Rover, Renault etc. TPV develops products which have a significant impact on the driving dynamics, safety, ecology and driving comfort.
The TPV Group is besides TPV d.o.o. composed of TPV Prikolice d.o.o., TPV Avto d.o.o. and TPV Šumadija d.o.o., extending their field of operation to sales of new and used cars, program of comprehensive services for car users and program of light car trailers. The latter are developed and produced jointly with the German partner Böckmann. TPV is also one of the partners in the development company called SiEVA, who develops technological competencies and takes part in various research projects.